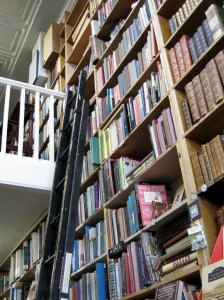 Located in downtown Palo Alto, Bell’s has served the Stanford University and Silicon Valley communities, providing new, used and rare books since 1935. With 300,000 volumes housed in an historic two story storefront spilling over with quality hardcover and paperback books in 500 subject categories, there is, quite literally, something for everyone at Bell’s.

We also have a new massive acquisition of Picasso and Matisse Art Books (partially on display), and a great bunch of  World War Two histories.

We would love to help you build a collection of your own.